The journal is included into The list of leading scientific periodicals.

The journal is included into VINITI database and is registered in Electronic scientific library.

The journal is indexed by SCOPUS, Ulrich's International Periodicals Directory. 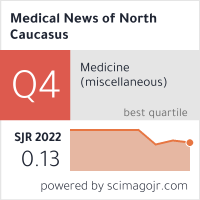 We investigated the intestinal hormone levels in the blood before and after surgery (1, 3, 7 and 14 postoperative days) in 24 infants with congenital intestinal obstruction anomaly and atresia. The children were divided into group 1 (N=10), which included newborns with inflammatory complications after the surgery, and group 2 (N=14), which included newborns without inflammatory complications. Twenty infants without operative treatment formed the control group. The level of BPI was determined by ELISA.